Revisiting the election from last fall 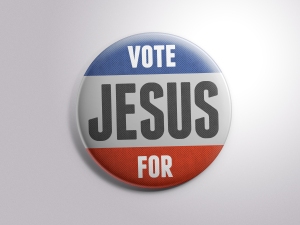 Last fall as the election loomed over our nation we launched a series called, “Vote for Jesus.”  It’s time to revisit that concept.

While the series was preached in the context of a turbulent national election, it’s far from a seasonal idea. In fact, I would suggest it’s a central idea to what it means to be a Christian, or a follower of Christ if you prefer.

Many of us have heard the concept that becoming a follower of Jesus is a simple as praying a prayer and then going on with life.  Sadly, for many, that’s been their experience.  Life just goes on as it did before with nothing more than an emotional memory.

But what if there’s more?  What if, in fact, Jesus invites us not just to “pray a prayer” but to elect a new king.  What if Jesus’ invitation is not simply to a collection of facts, but to a new kingdom?  What if Jesus’ words about “belief” and “faith” are more than intellectual ideas like algebra or astronomy, and more about allegiance to a new king?

That’s the main idea contained in a book I’ve been working through.  (Salvation By Allegiance Alone)  And I have to say, the author is speaking words of truth.  He suggests that what’s often missing in our understanding of Jesus and his invitation is the idea of “enthronement.”  As in, a new king has ascended to the throne, and we’re invited to give him our complete and total allegiance.

Back to the “Vote for Jesus” series.  That vote, then, means he’s my new king; a more personal and pervasive role than a president for sure!  It impacts areas like my marriage and family.  My finances.  My community of friends.  My intellect and education.  My struggles, battles and strongholds.  And my life goals and direction.

So regardless of which ballot you cast last fall, would you vote for Jesus today?  Would you make him king?  In every area of life?  That’s really what Jesus invites us to do.